Welcome to my photo blog!

My name is Carl Ferreira, and I run Lifelike Photos – a website where I post and sell my photos as well as photos from occasional events.

This blog is intended to provide a forum where I can post educational articles, tutorials, exercises, and hopefully commentary of general interest to photographers. Although I own a DSLR, I come from a compact camera background and I will generally try to include information that will be of use to anyone that would like to take better pictures. As this is my first attempt at using this technology, this will be a bit of a learning experience for me as well. Already I have discovered that spammers have posted to my blog (it was removed) and the blog hadn’t even gone ‘live’ yet. *Sigh* Such is the world we live in.

I have been taking digital photos for nearly ten years. I have also conducted training classes in a wide range of subjects for over 20 years. I’ve done some contract photography work, but I’m an engineer by trade and apply those skills to learn and analyze photographic techniques so that I can first apply them effectively, and then teach them to others. That’s where this blog comes in!

So without further delay, let me get into my first topic:

Scott Kelby – Photoshop and photography educator – has been sponsoring this even for four years now. With the exception of the second year (or was it the third?) where I had a scheduling conflict, I’ve participated in every one. I have picked different venues each year and this year I attended the event in beautiful downtown Los Gatos, California.

Our photowalk leader was Charlie Gibson, who is also active in the Los Gatos-Saratoga Camera Club. I’m going to have to check them out! Charlie did a great job of organizing the walk and planning out a route that covered a large section of old downtown Los Gatos. It was a great route, but a bit long, in my view. The group split in two and traveled past a variety of locales that were target rich environments.

Our first stop was a fundraiser for Los Gatos High School, the 9th Annual Art Glass Pumpkin Sale. I have no idea where they go so many glass pumpkins, but they had a ton! Click on the photo to the right to enlarge it and check out the colors and appearance of these decorations.

Since it took place on the front lawn of Los Gatos High School, there were many flower gardens available to photograph and lots of folks ended up stalling at our first stop – and we were only two blocks into it!

We spent a good 45 minutes at this location alone, but we all got a variety of photos that were worthwhile, such as this macro photo on the right of a rose. This was taken with a 300mm lens with a +4 macro filter.

Making lemonade out of lemons

Adjacent to the high school was an office building which also had many interesting landscaping and architectural features that many of the group oriented towards.

About this time the sun disappeared behind the morning overcast and a slight breeze kicked in. Some people in the group were complaining about the wind, but I figured I would make lemonade from lemons, so I set my shutter speed to 1/15 second and zoomed in as I took this picture. It makes me dizzy every time I look at it!

We finally got back on track and walked over to the Los Gatos Creek trail, although we were feeling a little pressed for time. It didn’t stop us from taking pictures – there were some very interesting “graffiti art” on the overpass walls, for example. I think we would have spent more time along this path also were it not for the feeling of time pressure, so we pressed on.

A large backlit leaf in a planterbox along the main drag

As we made our way across the main road, one of the flower box planters caught my eye. The sun had come out of its funk and had backlit this large leaf (probably about 12-14 inches tall). The colors and texture of this photo make it a keeper!

A row of bikes for sale

A row of bikes for sale afforded us another photo op with all of the bikes lined up for display on the sidewalk. By this time the sun had come back and shadows were strong, so I incorporated them into the composition.

We then headed into a residential neighborhood where there were quite a few beautiful old houses. Many had gardens or decorations that caught our eye. In front of one was some sort of big yard sale that had cookies and donuts for sale – I’m sure they did some unexpectedly good business today!

An ornamental face on a chimney

Some of the houses were old and funky, such as one that had molded faces attached to the sides of the chimney, such as this picture to the right.

A hummingbird does his thing outside the Museum of Art

Coming back into the commercial section, we came across the Los Gatos Art Museum, where I was lucky enough to find a hummingbird working away in the garden. Since I had my camera set up previously for another (missed) hummingbird opportunity, I was able to get a few quick(!) shots in before the hummer zipped over our heads and away.

A youngster enjoys the park

The final leg of our route led past a small park near the post office that sports a decorative fountain. There were several children enjoying the park and I grabbed a ‘stealth’ shot of this youngster on his (her?) weekend adventure.

The route ended – albeit about half-an-hour late – at the Purple Onion, a nice coffee cafe that has a restful outdoor area where many of the group met to share stories and chimp their shots.

All in all, a nice photowalk, thanks in large part to Charlie. I’ll have to check out the local photography club sometime in the near future.

That’s all for this time. There are lots more photos I could post, but you probably got at least a little feel for how this walk went for me. This blog thing can really eat up the time, but I hope to get two or three postings a week. Please feel free to leave comments and suggestions! 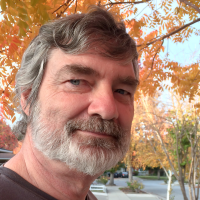